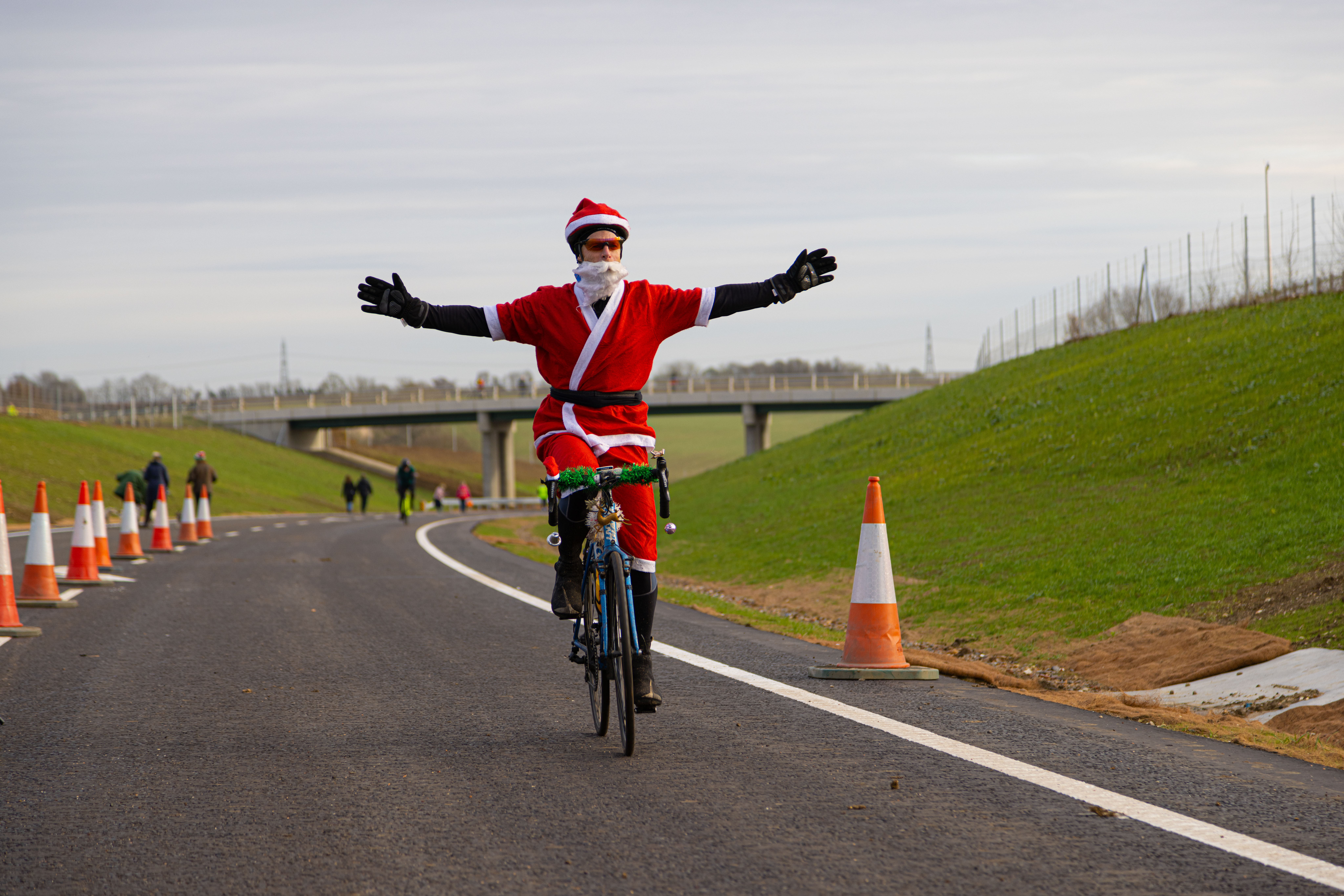 Over 500 adults, children and dogs enjoyed the chance to walk, jog and cycle along the new A120 Little Hadham Bypass and Flood Alleviation Scheme, before it opens to traffic.

The new 3.9km bypass, which is due to officially open on Wednesday 22 December, will alleviate congestion along the route caused by the Little Hadham traffic lights and provide more reliable journey times. As part of the scheme, new road embankments have also been installed along the River Ash and Albury Tributary to act as flood defences.

On Saturday, there was a chance for locals to learn more about the scheme, with information on the construction process, Roman archaeological findings and how the wildlife and environment were protected. A large puddingstone, weighing around 3.5 tonnes and with the appearance of a (Christmas) fruit pudding, was also discovered during the construction. The stone now takes pride of place in Little Hadham village.

‘’This multi-million pound scheme, which has been years in the making, is a real testament to the dedication and hard work of everyone involved with it. It also represents a great example of collaboration and strong partnership working together and facing the challenges that are inevitable with a project of this scale.

‘’This scheme like many significant projects across the country, has been hit hard over the last 18 months. COVID-19, along with significant adverse weather have provided big challenges for the team. During the construction period, there have been six ‘one in ten year’ extreme weather events. While the opening is later than initially planned, the continued efforts and determination to get us to where we are today should be commended.’’

The scheme, which Hertfordshire County Council worked on in partnership with the Environment Agency, also aims to improve air quality and ultimately benefit the county’s economy, with quicker transport links to Stansted Airport among the long-term advantages for Hertfordshire.

‘’The communities of Little Hadham and Hadham Ford are vulnerable to flooding from three watercourses. The proposal for the bypass provided the opportunity to incorporate flood alleviation measures, making a flood scheme for the village affordable.
I’m delighted to say the flood alleviation measures will reduce the risk of river flooding to all 72 properties currently at risk in the village to less than a 1% (1in100) annual chance flood event.’’

Hertfordshire LEP invested £8.26m from the Local Growth Fund and helped secure a further £27.4m from the Department of Transport as part of a wider funding package with Hertfordshire County Council and the Environment Agency.

‘’From the very beginning, we knew the Little Hadham bypass was vital if we as a county were to future-proof this key section of Hertfordshire's road network to accommodate further growth.

‘’Having a business-led, local response to recover and rebuild the economy has been and remains critical. LEPs have not just directed funds but have also facilitated serious levels of private investment into local areas. As this scheme demonstrates, the LEP is a catalyst for growth, working with local partners to pursue common levelling up goals and ensuring everyone in our communities can benefit from good growth.’’

Construction and Civil Engineering contractors GRAHAM have been the principal contractor responsible for the scheme.

‘’ This project will make a hugely positive difference to people who live nearby and to those visiting or passing through the area. Once open, this scheme will bring a great many safety, environmental and general road user benefits to Hertfordshire.

‘’I am very proud of how our team rose to the challenge - both before and during the COVID-19 pandemic. We were able to employ more than 20 people from the locality on site resulting in 14 full-time jobs. I would like to thank all involved on this project, which has been an example of how contractors, designers and clients can work together in a highly collaborative manner to reach mutual goals.’’

To find out more about the A120 bypass and flood alleviation scheme, please visit: A120 corridor | Hertfordshire County Council