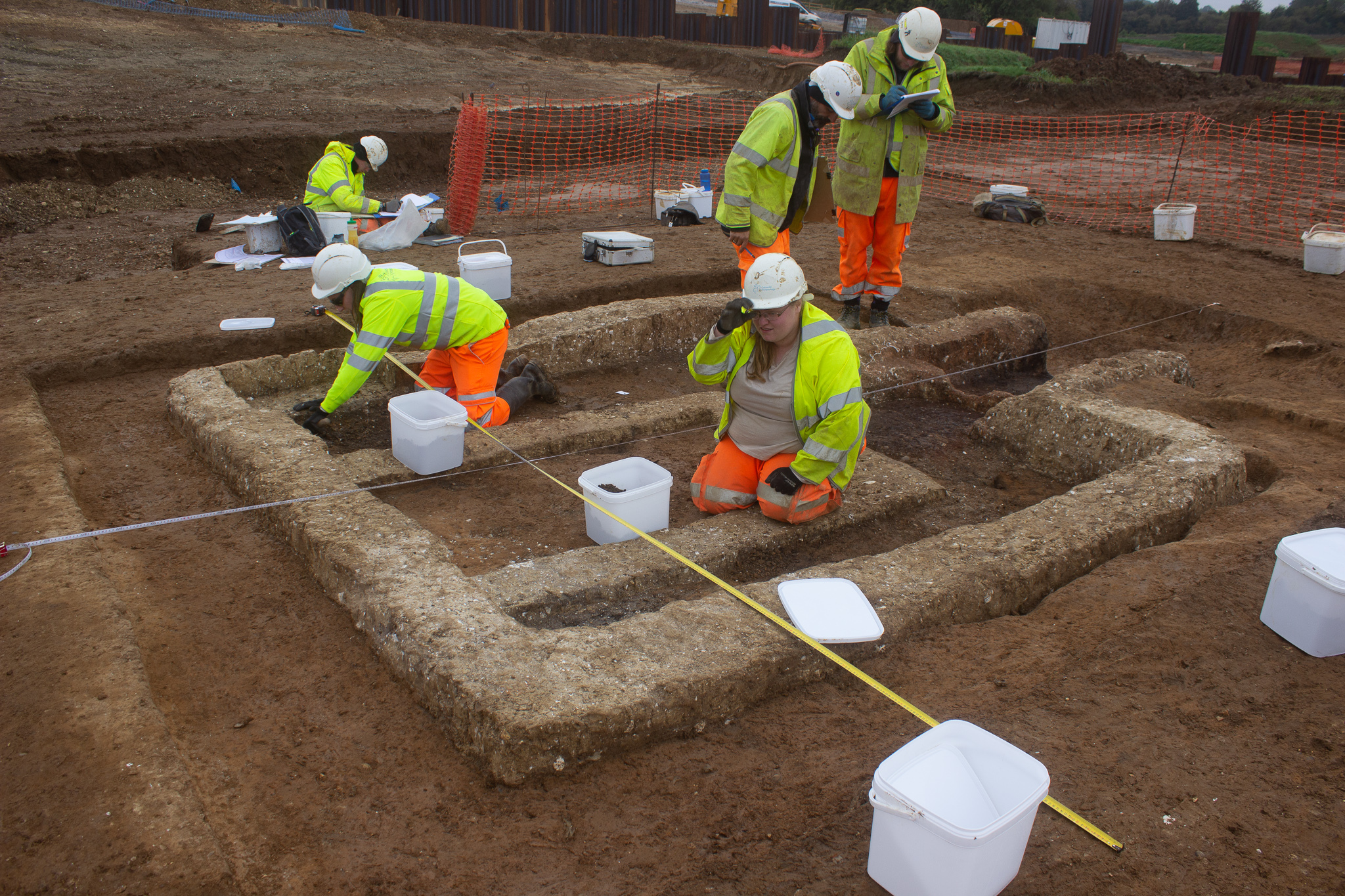 Archaeological digs as part of the A120 Little Hadham Bypass and Flood Alleviation scheme have revealed an intriguing insight into a 2000-year-old lost settlement.

The archaeological excavations were carried out over the summer and autumn months of 2019, in preparation for the construction of the new A120 route around the Hertfordshire village of Little Hadham.

Geophysical surveys were initially deployed in 2016, to explore the potential for buried archaeological remains followed by small trenches to test what might lie beneath the otherwise inconspicuous farmers’ fields. These preliminary explorations hinted that prehistoric and Roman remains survived, buried, along the line of the new road. As a result, a major archaeological excavation was undertaken in advance of construction. Cotswold Archaeology undertook the work, alongside the civil engineering and construction company, GRAHAM.

The excavations did not disappoint. The site team were quick to discover the foundations of Iron Age (300 BC) houses and the remains of the former field boundaries that would have sub-divided the farming landscape during this time. However, much of the archaeologist’s efforts were focussed on the Roman period remains, dating to the 1st to 4th centuries AD. A small cemetery was unearthed including the remains of four burials and 16 cremations, some of which survived within their urns.

Some of the more eye-catching finds include the 72 Roman bronze coins; nearly all of which date to a very short period between AD 330 and AD 348, the time when the House of Constantine ruled the Roman Empire.

“For me, the standout find was the Roman period corn dryer. This structure, specifically the preserved plant remains found within it, can tell us a great deal about the way in which the landscape was farmed. Finding out what was being eaten (and drunk!), gives us such a great insight into the daily lives of the people that occupied this part of Hertfordshire, nearly 2,000 years ago”.

“Delivering a construction project on this scale requires meticulous planning, while having to recognise that archaeological excavations are essentially an exploration of the unknown. I was personally drawn to the find of the fancy jet bead; a really pretty object that was most likely to have been made in Whitby, Yorkshire.”

“The construction of this important highway scheme has been a great opportunity for us to take a look at what’s under our feet, and learn more about the people who lived in our county hundreds of years ago. I’m delighted that these fascinating finds have been unearthed and examined to give us an insight into what life was like for our ancestors.”

Further research is on-going into the discoveries. Some webpages have been created to share what has been revealed so far, at https://cotswoldarchaeology.co.uk/community/discover-the-past/the-archaeology-of-the-little-hadham-bypass/. This will be updated in the forthcoming months as new details come to light.

The A120 Little Hadham Bypass and Flood Alleviation scheme is primarily supported by Local Growth Fund investment from Hertfordshire Local Enterprise Partnership (LEP), with additional investment secured by the LEP from the Department for Transport, as part of a wider funding package with Hertfordshire County Council and the Environment Agency.

The scheme will alleviate congestion along the route, helping improve air quality and provide more reliable journey times to benefit local residents and businesses, including quicker links to Stansted Airport. New road embankments along the River Ash and Albury Tributary will act as flood defences to reduce risk to the village and other nearby communities.

Find out more about the A120 Little Hadham Bypass and Flood Alleviation scheme at www.hertfordshire.gov.uk/a120bypass