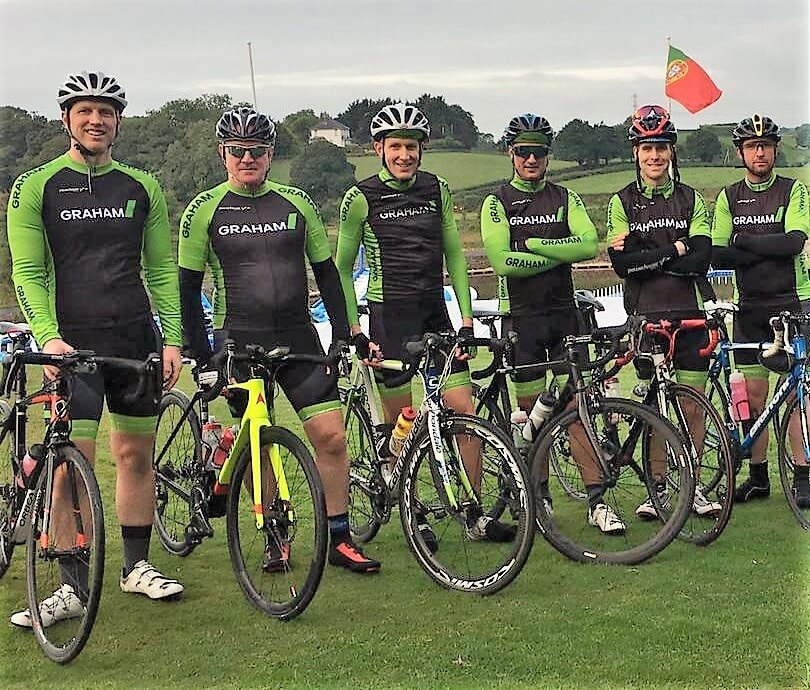 Last weekend marked a significant milestone for the (unofficial) GRAHAM Cycling Club as the team, which included colleagues from across the Group (Building, Civil Engineering, Interior Fit-Out, Facilities Management and Central Support Services), donned a striking new kit and powered its way across a 100km route for charity.

On Saturday 15th September, 11 cyclists from GRAHAM swapped their site and office attire for new cycling jerseys and shorts emblazoned with the well-known GRAHAM logo and brand colours before taking on the challenge of the AECOM 100 to raise funds for charities TinyLife and Brainstrust.

Boasting the largest contingent of participants from a single firm at the industry event, team GRAHAM was the first to roll out of the starting line and the colourful ensemble did not go unnoticed with positive feedback from fellow participants and onlookers.

The route itself covered 100km of rolling County Down countryside, starting and finishing in Carryduff and taking in Drumbo, Anahilt, Kinallen, Dromara, Seaforde, Killyleagh, Whiterock, Comber and Moneyreagh, before returning to Carryduff for a well-earned BBQ.

The team was thankful that the weather was dry and relatively calm and that the overall event raised over £2,000 for charity.

Commenting on the success of the day, GRAHAM’s Head of Assurance, Mark Gillespie, said:

“It was great to spend a dry morning on the bikes with colleagues and fellow cycling enthusiasts, on roads unfamiliar to many of us. I was delighted to have colleagues from all parts of the business represented on the day in support of such worthy charities.”

(Pictured): The GRAHAM cyclists in action during the AECOM 100