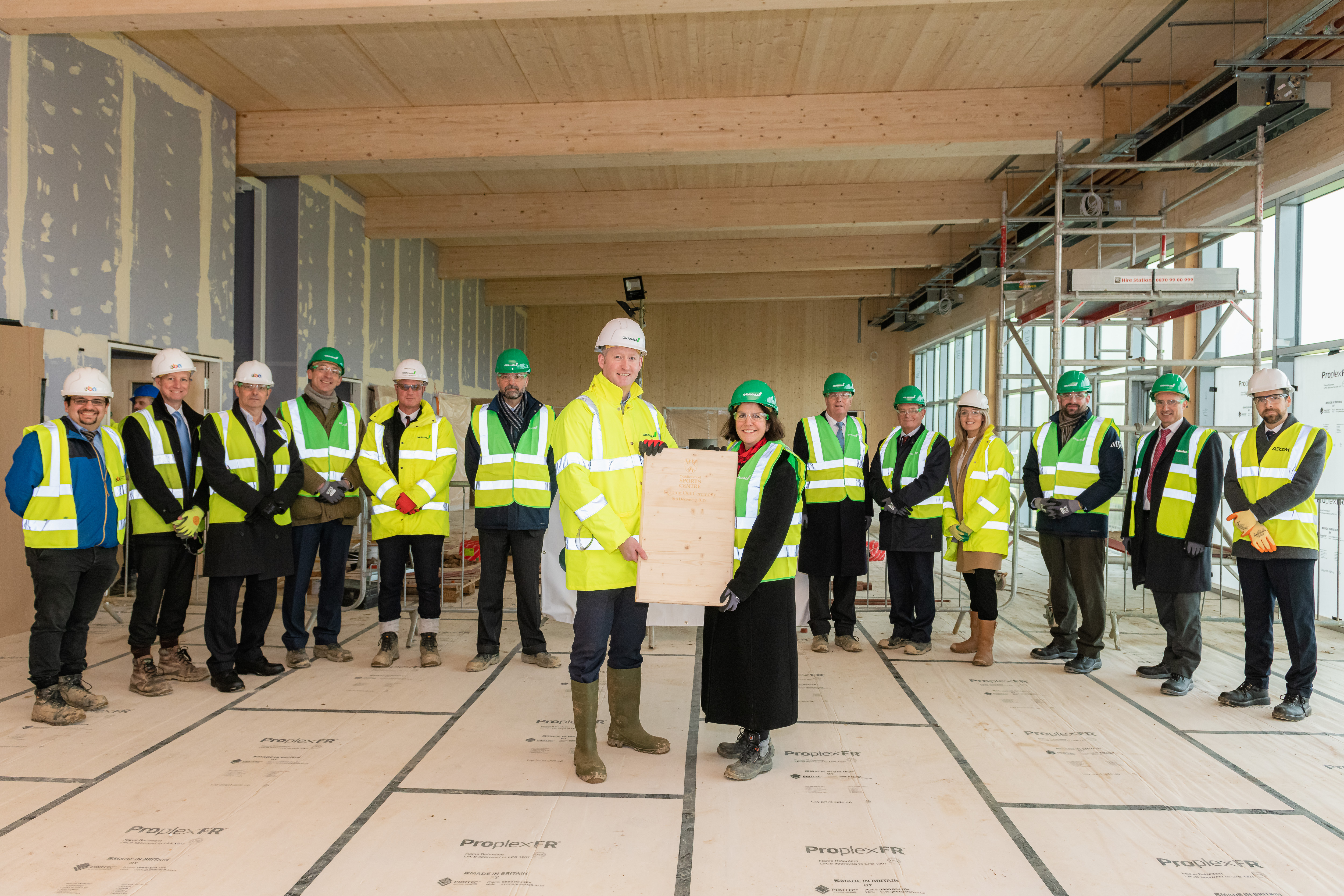 GRAHAM Regional Director, Ronan Hughes, with Sarah Kerr-Dineen, Head of Oundle School, and other GRAHAM and Oundle representatives at the topping out ceremony

We have marked a major milestone in the construction of a new Sports Centre at Oundle School with a topping out ceremony.

The event gathered representatives from the privately-owned contractor and Oundle School to celebrate the progress of the £24m project.

Once complete in Spring 2020, Oundle School Sports Centre will accommodate a 50-metre swimming pool, an eight court sports hall that offers adaptable playing space for a range of sports, as well as the opportunity for whole School assemblies through the use of retractable seating, a 70-station fitness suite, a dedicated dance studio, and three further multi-purpose rooms.

Dual use has been factored into the development to ensure that there will be year-round community and sports club access to the state-of-the-art facilities that span 5,000m2 of space.

Designed by Saunders Boston Architects, we have implemented a range of off-site manufacturing processes into its construction programme with the main frame being constructed of Cross Laminated Timber panels, providing a sustainable structure with a high-quality finish.

“The topping out ceremony represents a significant milestone in the construction of the new Sports Centre at Oundle School. We are proud to be working in partnership with Oundle School, which is one of England’s leading co-educational independent schools.

“The new Centre will provide its pupils with elite sporting facilities, and will help support the School’s vision to deliver a ‘thoughtful vision of sport’ to approximately 1,100 pupils at Oundle as well as a further 260 pupils at Laxton Junior School. Importantly, the multi-functional sports development will also be a hub for sporting and physical well-being activities for the wider community of the market town.

“GRAHAM has a proud tradition in the education sector, and this exemplar project is a further example of the technical expertise, quality and attention to detail that will deliver lasting impact to the pupils and wider community of Oundle.”

Oundle School, in Northamptonshire, is the third largest independent co-educational day and boarding school in England. Its pupils range from ages 11 – 18 and it also has a Junior School; Laxton Junior School for pupils aged 4 – 11.

The School has invested considerably in its sporting infrastructure as part of a wider Sports MasterPlan that has also led to the development of a new athletics track, eight additional tennis courts, two new AstroTurf pitches, and six additional netball courts.

Speaking at the topping out ceremony, Sarah Kerr-Dineen, Head of Oundle School, said:

“The new Sports Centre is really starting to take shape and to become a reality. For all of us who have been part of the process from the beginning, it is exciting to see the progress that is being made. The facilities will support sport at a top competitive level whilst catering for a multitude of sports and leisure activities at all levels, not just for our pupils but the broader community of which the School is a central part.

“We want our pupils to take from School the attitudes, knowledge and enthusiasms that will support a happy, productive adult life. This must also be true of our School sport, and this new Sports Centre will make a massive contribution to realising this ambition.”

Oundle School is situated in the quintessentially English market town of Oundle, about 90 miles north of London. The School’s buildings, dating from the 17th to the 21st centuries, are dispersed throughout the town, which is, to a large extent, its campus.

The School’s history dates back to 1556, when Sir William Laxton, Master of the Worshipful Company of Grocers and Lord Mayor of London, endowed and re-founded the original Oundle Grammar School, of which he was a former pupil. In 1876, the Grocer’s Company divided the School into two parts; Laxton Grammar School, primarily for the inhabitants of the town, and Oundle School, primarily for pupils from further afield. In 2000, the Grocers’ Company reunited the two schools under the common name of Oundle School and retained the name of Laxton for the day House.