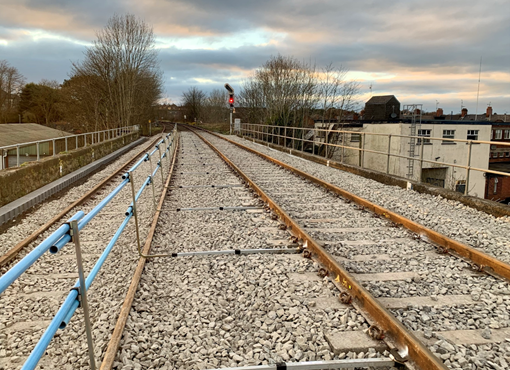 Three major sites, namely the Braid Bridge, Coolderry Bridge and the Culbreen Bridge, were all part of the Translink commissioned contract that was awarded in late January 2021.

Before construction work could commence, an intensive two month planning process was required, which resulted in the identification of a more efficient 72-hour single possession solution as opposed to an original two-pronged possession plan totalling 108 hours.

This innovative approach considerably reduced disruption to the rail network by a full day and a half (36 hours) and also allowed the GRAHAM team to de-risk the programme for two of the bridges.

As part of the package of works, the existing Culbreen Bridge structure was demolished, meaning costly ongoing maintenance is no longer required.

The underside of the entire deck and outer edges of the Coolderry Bridge underwent hydro-demolition before the existing steelwork was drilled for reinforcement to be laid and the surface shot-creted. These important bridge strengthening works, conducted for the first time during a disruptive rail possession, have restored the bridge’s weight restriction to its original design of 40 tonnes.

The Braid Bridge works, on a four-arch masonry structure over the River Braid in Ballymena, involved the removal of 70m of twin track, sleepers, ballast and structural fill. Subsequently, the bridge was waterproofed and reinstated, extending the life span of the structure. The track was also re-laid, welded and stressed.

The works were completed concurrently between the morning of Saturday 27 March 2021 (00:01) and the early hours of Tuesday 30 March 2021. They were completed ahead of programme, allowing early handback of the network.

Commenting on the successful planning and delivery of the bridge replacement and refurbishment project, Andrew Henry, GRAHAM Contracts Manager, said:

“Generally, a multi-site scheme of this complexity would require a prolonged period of advanced planning and programming, sometimes as much as nine months. Demonstrating our technical competency, we were able to develop a more effective solution of a 72-hour single event possession in as little as two months. This ensured a more efficient process and reduced disruption to the network. Significantly, our waterproofing work, involving loose laid sheeting, was the first of its type to be carried out on a ‘live’ Translink asset for a considerable length of time.

Overall, our planning and delivery reflect the successful long-term collaborative relationship that we have developed with Translink, and we look forward to working in partnership on further schemes to future-proof the local rail network.”

The works form part of a wider package of significant upgrades to eight individual bridges on the railway network. The entire GRAHAM programme is scheduled to conclude in Autumn 2021. Planning is currently well under way to the other structures, including the replacement of a section of stairs and footbridges at Lisburn Station.

‘‘Translink is undertaking an essential programme of scheduled railway bridge maintenance across our network to enhance safety and reliability, as well as to minimise the need for future maintenance.

‘‘Public transport passenger numbers are growing again as the pandemic recedes and projects like this to enhance our infrastructure are essential as we progress towards a ‘green’ recovery in which public transport plays a full part.

‘‘I would like to thank GRAHAM and the Translink project team for progressing this important project and delivering the highest standards for our railway passengers.’’

GRAHAM has established a lengthy partnership with Translink that stretches back decades. Notable schemes include the construction of Adelaide Depot in Belfast and Portrush Train Station, and most recently works at the Lagan Junction.