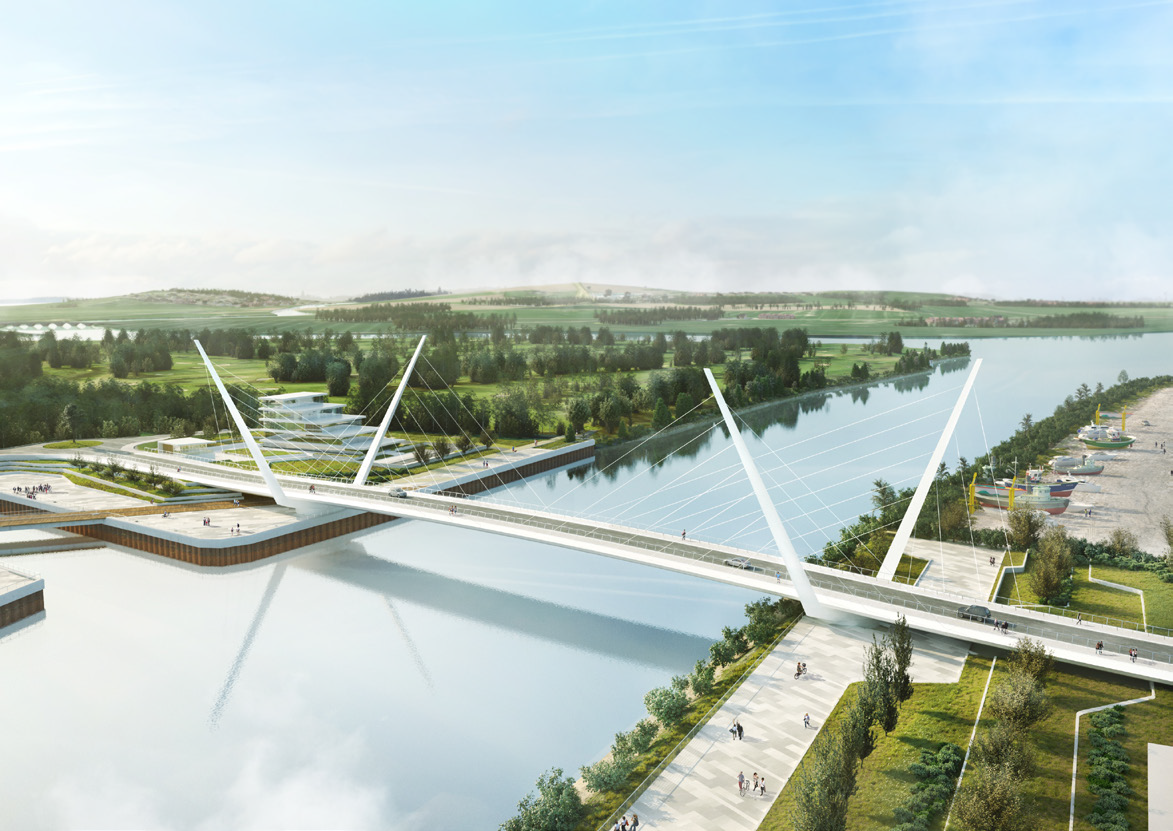 A £79.5million construction contract to build the first opening road bridge over the River Clyde and create new connections into Scotland’s manufacturing innovation district has been approved for award.

Councillors from Renfrewshire Council’s Finance board have agreed to award the Clyde Waterfront and Renfrew Riverside contract to civil engineering specialists, GRAHAM.

The project is jointly funded by the UK and Scottish Governments through the £1.13billion Glasgow City Region City Deal. It will support around 700 jobs during its construction and generate hundreds of subcontract and supplier opportunities.

“We are delighted to have approved the awarding of this contract and look forward to working with civil engineering specialists GRAHAM and its project partners on what is a hugely significant project for Renfrewshire, the Glasgow City Region and indeed Scotland.

“We are excited by its potential in creating a vibrant attractive waterfront and connecting communities to their work, to hospitals and to education. Short-term, it will accelerate economic recovery from the devastating impact of the Covid-19 pandemic by creating jobs and boosting opportunities for suppliers and in the long-term, the new infrastructure opens up access to development opportunities on both sides of the Clyde and will ensure the success of AMIDS, cementing Renfrewshire’s position as the home of manufacturing innovation in Scotland.”

A twin-leaf swing bridge for vehicles, cyclists and pedestrians from Renfrew to the boundary between Glasgow and West Dunbartonshire forms the centrepiece of the project.

All planning consent is in place and construction is scheduled to start in Spring and take three years to complete, with the contract to be finalised later this month following conclusion of the procurement process.

There’s also riverside walking and cycling routes and a new road through Renfrew connecting the bridge to the Advanced Manufacturing Innovation District Scotland (AMIDS) being developed by the Council in collaboration with Scottish Government and Scottish Enterprise.

Economic estimates in the final business case published last month found the waterfront project could lead to 1,400 permanent posts and 950 temporary construction roles from the resultant £230million in private sector investment expected to be attracted to development sites on both sides of the Clyde over the coming years.

“Across Scotland we have so far committed more than £1.9billion over the next 10 to 20 years to City Region and Growth Deals and additional investments. It’s great to see such significant progress in delivering this transformative project, which will create jobs, apprenticeships, and new connections into the manufacturing innovation district.

“The Scottish Government is a full partner in the Glasgow City Region City Deal, contributing £500 million over 20 years. The investment in this project through the Deal will contribute to the region’s economic recovery by creating jobs and providing the commercial infrastructure to support and attract businesses to Glasgow and the surrounding areas. It also encourages active travel supporting walking and cycling infrastructure in the area.”

“This ambitious project will support jobs and bolster the Clyde area as a great place to live, work and do business. The UK Government is investing billions of pounds and working with partners across Scotland to build back better from the pandemic and deliver for local communities. Across Scotland we are investing more than £1.5billion into City Region and Growth Deal projects."

The contract approval follows an extensive procurement process over the last two years, which considered in depth the technical expertise, carbon reduction activities, fair work practises and all the knowledge and experience required to deliver the project.

Civil engineering contractor GRAHAM, who have a waterfront office in Renfrewshire at Braehead, will deliver the main construction and provide more than 100 community benefits including jobs, apprenticeships, and community volunteering activities.

“We’re delighted to have been chosen to deliver the Clyde Waterfront and Renfrew Riverside project, including the River Clyde bridge, with our design partners Ramboll and Amey.

“The new bridge will provide a gateway to the area’s fast-growing manufacturing innovation district and help better connect communities with significant employment and development opportunities for what will be a transformational project for the Renfrewshire and Glasgow City regions.

“GRAHAM are specialists in delivering complex civil engineering projects and our innovative construction solution will minimise the carbon impact, while we will utilise our knowledge and experience from previous landmark bridge construction and installations such as the Samuel Beckett Bridge in Dublin and Carpenters Land Bridge in Stratford to ensure this key infrastructure scheme is completed to the highest standards, while ensuring we deliver a sustainable legacy and positive impact.”

Further Glasgow City Region City Deal funding is supporting Renfrewshire Council as it converts a 52-hectare site next to Glasgow Airport into a research and development centre for advanced manufacturing.

Construction of the underpinning infrastructure is scheduled for completion this year and plans are progressing for a specialist carbon reducing district heating network, campus square and riverside green spaces.

The district has already attracted £185million in infrastructure, research, innovation and skills facilities, with construction started on both the flagship National Manufacturing Institute Scotland (NMIS) headquarters facility and the Medicines Manufacturing Innovation Centre.

Boeing, the world's largest aerospace company, has touched down at the adjacent Westway Business Park to research metallic component manufacturing in partnership with experts from the University of Strathclyde’s Advanced Forming Research Centre – part of the NMIS group. Westway is also home to another of the NMIS Group’s specialist technology centres, the Lightweight Manufacturing Centre.

“The National Manufacturing Institute Scotland is the flagship for the future of manufacturing in the country, bringing together companies and people from across the manufacturing and engineering community in Scotland, the UK and beyond. The development of AMIDS and the ongoing investment in vital transport infrastructure is central to us transforming productivity levels of our manufacturing businesses, making them more competitive and boosting the skills of our current and future workforces.”

“We’re delighted to be part of AMIDS, placing the Medicines Manufacturing Innovation Centre at the heart of advanced manufacturing in Scotland. The new Centre will be world-leading and attracting world-class people is key to its success. This investment in infrastructure will enable vital transport links to the city region, attracting both talent and potential partners who want to locate to an internationally recognised innovation area.”