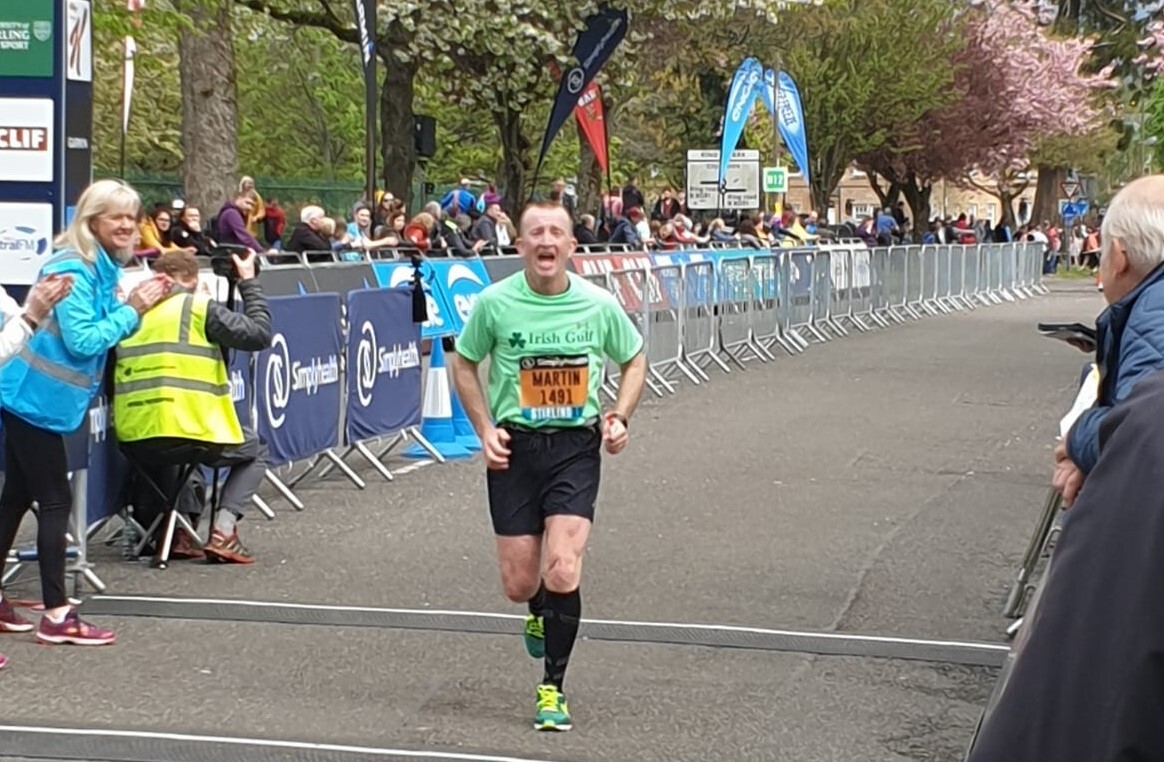 As a crane operator, the 48-year-old is responsible for transporting construction material from one place to another.

Currently, the Cork native is operating and managing a crawler crane as part of our Dounreay site restoration team to construct a new shielded Intermediate Level Waste Drum Store Extension and an Unshielded Waste Store Extension for shielded waste containers.

Having been a GRAHAM colleague since 2009, Marty has manipulated and manoeuvred hundreds of thousands of tonnes on projects up and down the UK, including the M80 Stepps to Haggs, Fife Wind Turbine, Lea Bridge and Tennison Road Bridge.

But “shifting” one particular five-stone load stands out.

Equivalent to 32kg, it may seem insignificant compared to the quantities associated with his day job, but for Marty it represents a life changing figure.

That’s because it is the amount of weight he has lost thanks to the implementation of a focussed healthy lifestyle and exercise regime.

Having surpassed the 16 stone mark, regularly smoking 60+ cigarettes a day and “generally not looking after myself”, Marty was your stereotypical male construction worker.

His sedentary role did not help matters. Nor did his routine. Often on the road, the temptation to eat junk food was always there - quick and easy.

His days of hurling, playing Gaelic football and exercise were confined to history. Work was a convenient excuse, and after long hours on the job it seemed easier to put the feet up in front of the television.

As the years drifted on, his weight ballooned.

“I am five foot nine inches tall, so when I was up to 16 stone in weight it was very noticeable. I didn’t feel good in myself. I wasn’t exercising, I had a bad diet and I was smoking a lot,” explained Marty.

“It was just a continuous cycle, and it was a difficult one to break.”

The catalyst for change was unremarkable.

Sitting in digs with other construction workers one evening, the land lady snapped and taunted the men to “get out, go for a walk and lose some weight”.

While the others laughed off the remark, Marty took heed and followed the advice. A short walk eventually became part of his daily routine.

Gradually it morphed into a longer walk, and with “the bit between the teeth” Marty progressed to running and completing workouts in the gym.

The cycle had been broken, so much so that friends remarked that his “clothes were hanging off”.

“It was a gradual process, and once I started to see results it just gave me the motivation to keep going,” added Marty.

“There is no doubt that it was hard work. And, what I tell people is that it didn’t happen overnight. It takes patience and dedication over years and years, but I am so thankful that I started the journey and have persevered.

“Taking that first step was the hardest thing and once I got over that hurdle, I became very focussed, going to the gym regularly and running. Giving up the cigarettes was also important, and I haven’t looked back since.

“Running, and fitness in general, have given me a big boost in my life. They help me blow off steam. I keep a picture of myself when I was 16 stone and unhealthy, and I swear every day that I’m not going back there every time I look at it.”

Marty Ryan - before and after

As with any significant lifestyle change, there have been blips along the way. After all, old habits die hard.

Only last year, the crane operator began to put on a few kgs around his midriff, leaving him not feeling “right in myself”.

With a renewed focus, Marty made the decision to sign-up for his first marathon – the Stirling Marathon 2019.

Showing his customary determination, he applied himself to a bespoke training programme that incorporated long runs of 22 miles, with recovery sometimes aided by quick dips in the Atlantic Ocean at Thurso to soothe his weary muscles.

Reluctantly, and following encouragement from his personal trainer, he also hit the weights room for the first time.

The blend of cardio and strength proved to be the perfect marriage as Marty recorded an exceptional debut time of 3 hours 7 minutes and 26 seconds for the 26.2mile test of endurance.

The performance, equating to a pace of just over seven minutes per mile, was good enough for 44th overall out of 5000+ competitors.

It also positioned Marty in eighth place in the Veteran 45 age group category.

“It was an amazing experience and I’m very proud of myself to have performed so well,” said Marty who lives in the town of Greenock, situated within the west central Lowlands of Scotland.

“Running a marathon is not easy and from 20 miles to 24 miles it was a tough mental battle. But I proved I had the mental strength, and finishing so high up was a big surprise. It has provided me with a lot of confidence, and it has given me the motivation to improve and maybe do another marathon in the autumn.”

Now a lean 72kg, a world away from 100kg+, with a body fat percentage of 11.7%, Marty is a shining example of what can be achieved through hard work and dedication.

As we enter Men’s Health Week, what advice would he give to fellow GRAHAM colleagues who are nervous about taking that first step towards a healthier lifestyle?

“Go for it. You won’t regret it,” passionately stated Marty.

“I’m so much happier in myself. I’m in a good place. I would tell anyone, don’t give up. It takes time, years even, but when you get that consistency you will notice the difference physically and even mentally. It doesn’t get any easier, it’s just that you get better.

“Look into the mirror, that’s your only competition. You have to be willing to sacrifice things and listen to people who can give you advice. Of course, it’s your own choice but from my perspective it’s one of the best decisions I’ve ever made.”

Men’s Health Week runs from June 10th to 16th. The focus for 2019 is on the key numbers that men need to know about their own health.