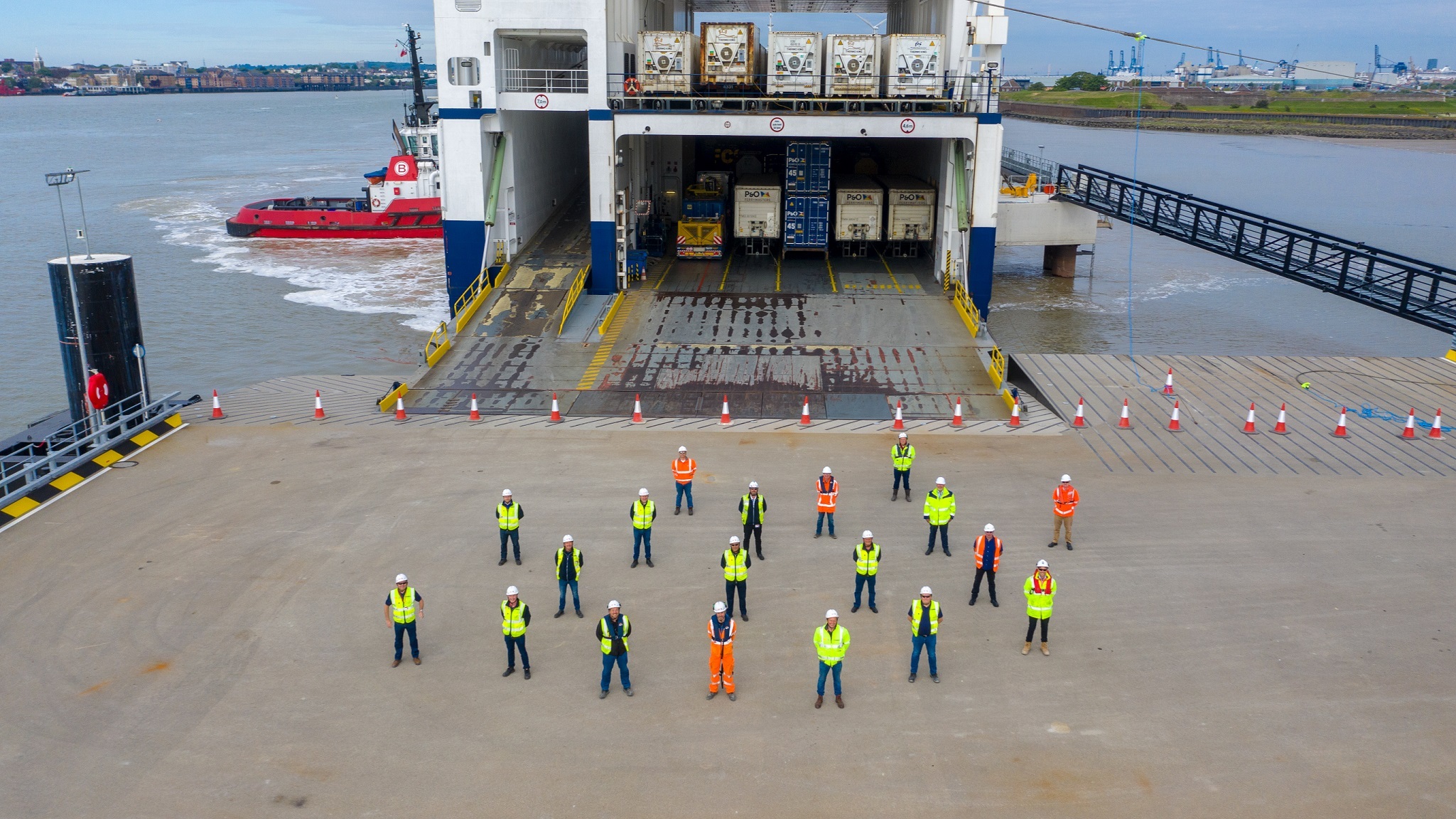 The UK’s newest and largest unaccompanied freight roll on/roll off (ro-ro) terminal at Tilbury2 took a step closer to opening with the successful completion of ship trials at the weekend.

Two of P&O’s chartered freight ferry fleet, the Bore Song and the Norstream, arrived at the new ro-ro terminal on the Thames on Sunday 17 May where the port team carried out a full test of the marine facilities including manoeuvring and tying up the ship to test the berth; lowering the ship’s ferry ramp to test the pontoon facilities; and carrying out a full risk assessment. The ship trial was deemed a success with a smooth execution of all the test points being achieved.

The ferry terminal, which is due to open next week, has a capacity of 500,000 units and will operate in partnership between the port and P&O Ferries importing and exporting containers and trailers with food, drink, medicines and other vital supplies to-and-from Europe.

“I am extremely proud that we have reached this point with our new port. We are in unprecedented times, both in the UK and globally, and this new unaccompanied terminal at Tilbury2 will ensure that we keep the vital supplies coming into the country as safely as possible, not just now but long into the future. Being a freight only terminal ensures that there is less risk of driver infection and exposure for our own quay workers at the port. The additional capacity of 500,000 units with streamlined customs procedures will enhance national economic resilience I would like to thank our excellent team for achieving this milestone in such challenging times.”

Tilbury2 is a new port at the former Tilbury Power Station on the north bank of the River Thames on the outskirts of London. When fully operational, Tilbury2 will be the UK’s largest unaccompanied freight ferry port, the country’s biggest construction processing hub and will see the creation of a new significantly larger rail head which can accommodate the longest freight trains of 775metres.

“The successful ship trial at Tilbury2 means that P&O Ferries will soon be able to offer customers even more choice when it comes to moving goods punctually, efficiently and reliably between Britain and Europe. The new berth will make our service faster and will guarantee that goods from Europe can be unloaded and continue their journey onto the M25 before the rush hour – a significant benefit for our customers. Tilbury2 will further strengthen the unrivalled connectivity we offer our customers along the entire east coast of England and demonstrates our commitment to making trade flow during this crisis and beyond.”

Peter Ward, Commercial Director at the Port of Tilbury, said:

“The ship trial at the weekend marks an important milestone for the T2 project. We started construction in Spring 2019 and working with GRAHAM, we are on track to open the first part of the port next week. The marine works were an important part of the project and included constructing a floating pontoon, link-span/articulated bridge, pilings and riverbed preparation for the berth. My thanks to the team at GRAHAM and P&O and the PLA for supporting us with these trials.”

“The successful ship trial at Tilbury2 is a major milestone for operations on the Thames. On the doorstep of the UK’s major consumer market, this is the logical place for new marine infrastructure, adding further resilience to supply chains which is essential in these challenging times.”

“The completion of the first ship trial at Tilbury2 is very exciting news for the project. We were proud to be selected for both the terrestrial and marine packages of works, and the size and scale of the development, whilst challenging, has been very rewarding for our team to be involved in. We’re now looking forward to the opening of the ferry terminal and seeing both our and the Port of Tilbury’s hard work coming to fruition.”

Tilbury2 received development consent from the Secretary of State for Transport in February 2019 to build Tilbury2 – the new multimillion-pound port terminal adjacent to the current 930-acre site in Thurrock, on the outskirts of Greater London.

The £200m Tilbury2 project consists of the construction of a new port terminal and associated facilities and once fully open, Tilbury2 will comprise:

The project is central to the Port of Tilbury’s £1 billion investment programme during 2012-20, which has seen it double the size of its business in the past 10 years and is projected to double the volume of cargo across the quay (from 16 million to 32 million tonnes) and increase direct employment (from 3,500 to 12,000 jobs).