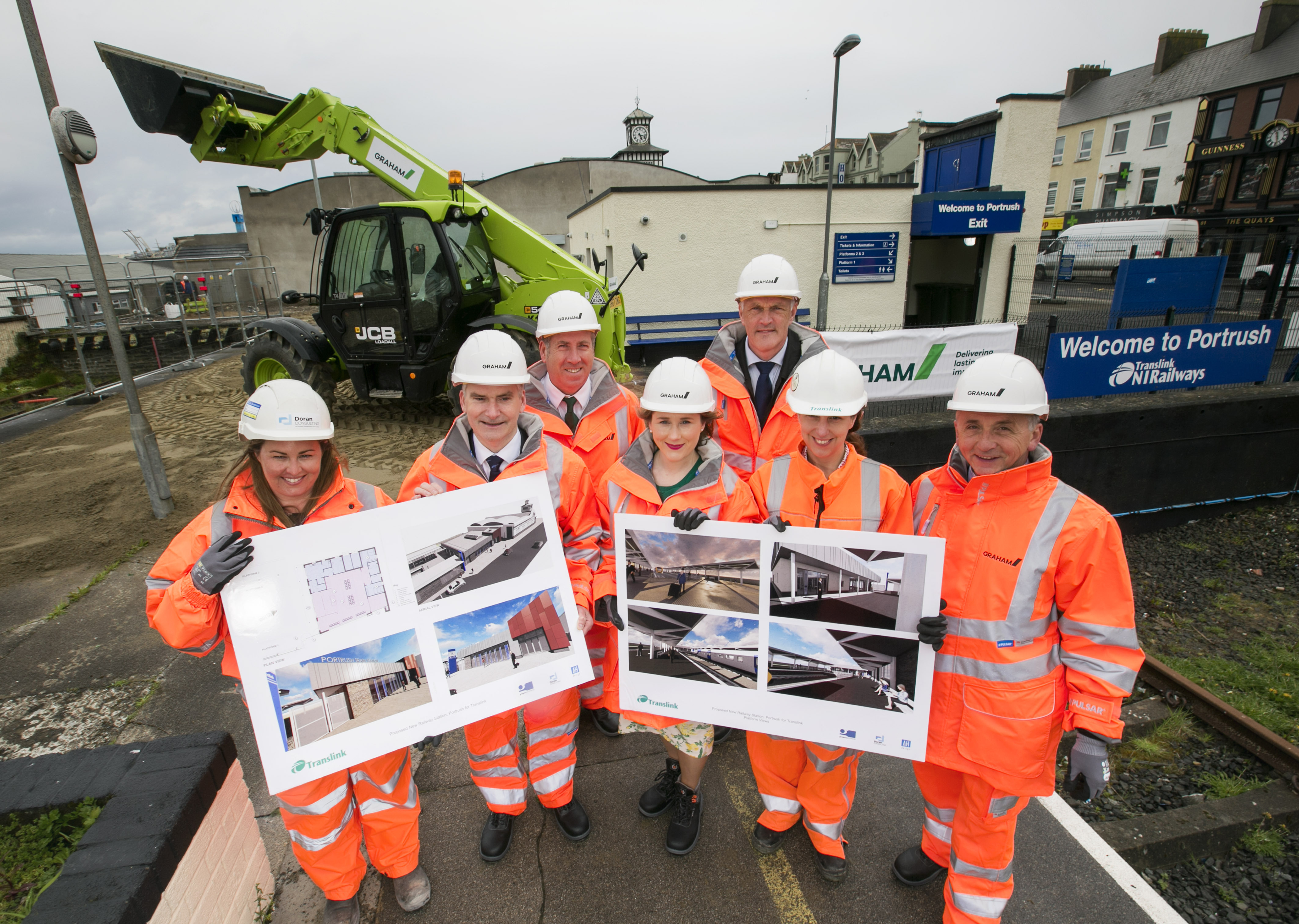 Ambitious plans are afoot on the North Coast as work gets underway on a new modern train station in Portrush, which is designed to attract and enable future growth of rail passengers travelling to and from the seaside resort.

An event to mark the official start of construction work at the station was held on Wednesday 9th May, under the stewardship of GRAHAM.

The scheme represents an investment of approximately £5.6m, with funding secured from the Department for Communities (£4.7m) and Department for Infrastructure (over £900k).

The new train station is one element of a wider £17m Portrush Regeneration Programme, led by the Department for Communities, which also includes a major public realm and revitalisation scheme for the town.

GRAHAM’s Managing Director – Civil Engineering, Leo Martin, said: “We’re delighted to have been awarded the Portrush Train Station contract. We recognise the importance of this project as part of the overall Portrush Regeneration Scheme and its ambitions to enhance the image of the surrounding area and to help regenerate the local town.

“The eyes of the world will descend upon Portrush for the 148th Open and we’re proud to be able to play our part in shaping the growing reputation of the town, and Northern Ireland as a whole. But, more than that, we’re committed to delivering a lasting impact and a legacy for Portrush as it aims to enhance its high quality tourism offering for the future. This new station will certainly act as a catalyst for growth.

“Translink, and the rail sector throughout the UK and Ireland, trust us to deliver projects safely and efficiently, with a focus on exceeding client expectations.

“We are looking forward to strengthening our relationship further with Translink and are determined to complete the Portrush Train Station to the highest standards, which will serve to broaden Portrush’s visitor market base and help to create a whole year tourism economic base for the town.”

Work is set to be completed next spring ahead of the 148th Open, Portrush, to be held in the town in July 2019.

This major sporting event offers a significant opportunity to sustainably develop the economy of Portrush town and the wider North Coast in a way that will bring substantial benefits to the area in terms of visitor numbers, spend and investment.

The new, modern, fully-accessible station will allow for further passenger growth at Portrush station, with over 620,000 journeys per year currently being made to and from the existing station. It will also contribute positively to the ongoing regeneration in Portrush town centre and surrounding area.

Key benefits of the project include:

Chris Conway, Translink Group Chief Executive, said: ‘‘We are delighted to get this exciting project under way. The new facility will provide modern passenger facilities to cater for the growing passenger numbers and will play a key role in the transport plans for the 148th Open next year. We are transforming public transport to be ‘Your First Choice for Travel in Northern Ireland’; this new fully accessible station will offer modern waiting facilities, improved passenger information and signage to local amenities and attractions as well as enhanced cycle storage to encourage active travel and ‘greener’ tourism links.”