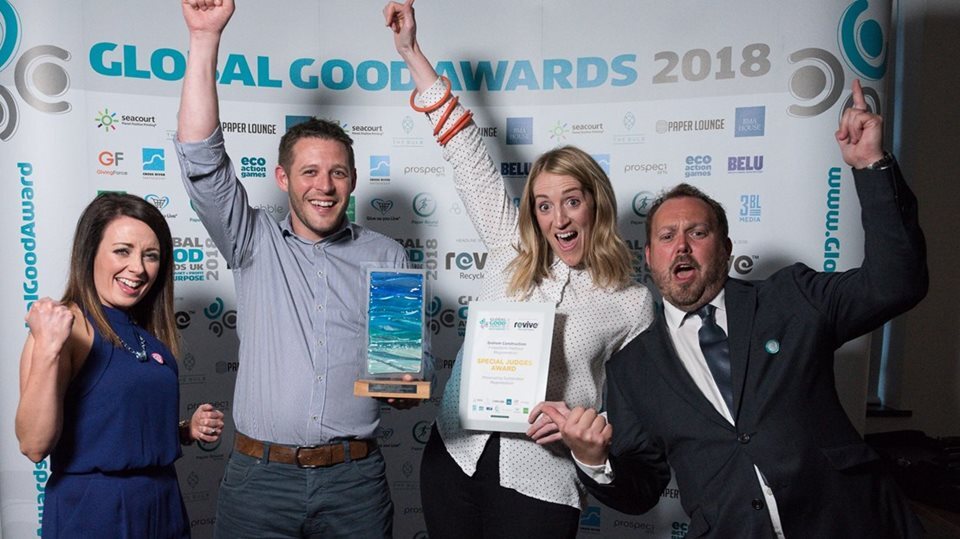 GRAHAM’s role as the principal contractor in the regeneration of Folkestone’s historic harbour area has been recognised with a ‘Special Judges Award for Sustainable Regeneration’ at the Global Good Awards UK.

The prestigious national Awards celebrate organisations of all “shapes and sizes” that are making strides towards a “better world for people, the planet and the global economy”.

The list of winners, across 17 individual categories, was announced on May 17th.

The ‘Special Judges Award’ hailed GRAHAM’s commitment to sustainability in the realisation of long-term regeneration goals as part of the Folkestone Harbour project.

Work on the Folkestone project commenced in March 2017 and concluded in April 2018 following a 12-month programme.

The revitalisation of the seafront has not only improved the attractiveness of the town but also ensured that Folkestone has an economy that works for 12 months of the year.

“We are honoured to receive this coveted accolade in the face of such strong competition. Our work at Folkestone Harbour was not just a fantastic project to be involved in but one that clearly demonstrates how we focus on delivering sustainability and social benefits.

“Our attention to design excellence has helped to solve the very real issues, which previously threatened the viability of redeveloping this area, namely flood risk and the rising costs of sea defences.

“The project has significantly enhanced access to amenities for the next generation of Folkestone, which reflects the message behind GRAHAM’s guiding principle - ‘delivering lasting impact’.”

The £6m scheme consisted of three phases of preparation works throughout the harbour area including the renovation of a Grade II listed swing bridge and railway viaduct, public realm works and erosion protection.

Importantly, the seasonal Harbour Arm, and its entertainment and restaurant venues, remained open and accessible throughout the works.

To prepare for the redevelopment, 10,000m3 of existing hardstanding and sand was dredged from the outer harbour before being reused as ballast to strengthen the harbour structure.

The reinstatement of a wooden boardwalk and promenade has considerably strengthened the usability of the area while the refurbishment of the historic rail swing bridge accommodates a new walkway, inspired by New York’s highline ‘Rails to Trails’ initiative.

“The development of the historic harbour area is key to the regeneration of the wider town. We are very proud to have been involved in ensuring its long-term survival,” added Leo.

“Working collaboratively with our partners, we have been able to demonstrate the application of the circular economy and have maximised value and sustainability for the end users – the local people of Folkestone.”

GRAHAM’s project team worked closely with the Environment Agency to meet the requirements outlined in the Marine Licence and followed the CL: AIRE Protocol to store and reuse the material on site.