The £16.8m Broomielaw and Tradeston Public Realm and Quay Walls project has successfully regenerated previously neglected areas situated on both banks of the River Clyde. The Broomielaw works involved the stabilisation of 400m of the sheet piled quay wall, increasing its height by approximately 1m, while the Tradeston element of the scheme focused on the replacement of 250m of the existing quay wall, 20m into the River Clyde. Approximately 13,800m2 of Linear Parks were also created in the public realm works, transforming an unloved part of Glasgow city centre into an attractive modern public space.

Reflecting the success of this complex project, Glasgow City Council encouraged GRAHAM to submit the scheme for consideration at the British Construction Industry Awards (2010).

Although unsuccessful in the face of stiff competition, the £16.8m programme has revitalised this section of Glasgow’s riverside and maximised new development areas. The new quay walls, consisting of driven piles with infill sheet piles and tie rods, allowed for increased flood protection. Specifically, the works at Broomielaw required strengthening and stabilisation, which included protection to existing tie rods and drainage provision. Furthermore, the wall was then raised by constructing a new capping beam on top of the existing wall.

The Tradeston project involved the removal of 250m of existing quay wall, and jetty, and its subsequent reconstruction, 20m from the existing quay wall. In addition, some 13,800m2 of Linear Parks were created in the public realm works. 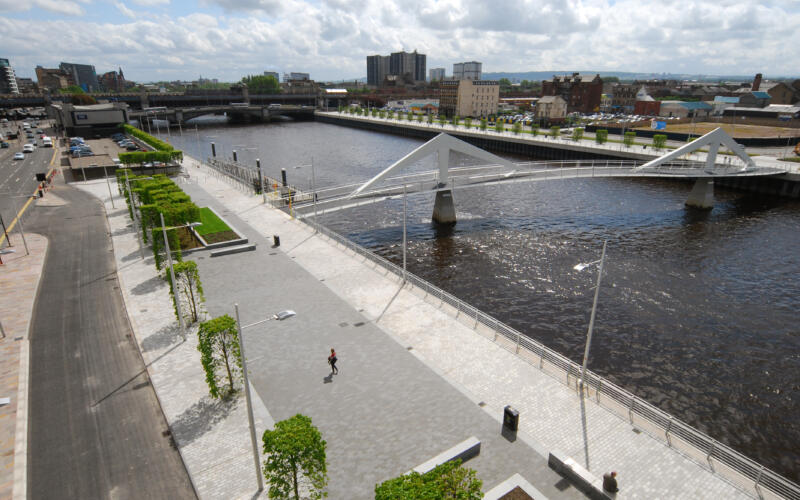